Article written by Deb Abbott. Thank you to Sarah Stewart for the photos! 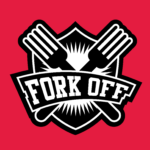 Have you ever tried to prepare a meal just using ingredients from a Food Bank? That’s the challenge that two of Ottawa’s finest chefs faced when they participated in the Parkdale Food Centre’s ‘Fork Off!’ Competition.  Knowing that Parkdale Food Centre stocks food from Canada’s Food Guide is helpful and means there will be fresh ingredients including fresh protein. But still –  preparing a three course restaurant style meal for judges can be pretty intimidating, especially when you normally have a fully stocked kitchen with fancy equipment and all the pots and pans that you would ever need.

Almost three  weeks ago Chef Patrick Garland from Absinthe was defending his title against Chef Tim Stock from Thyme and Again – Chef Garland had won the Fork Off twice before and was defending his title.  Both Chefs arrived early to check out the contents of the Food Bank at Parkdale Food Centre only to find meagre offerings – after a busy week of helping neighbours the shelves were low.  There were canned sardines, canned salmon, canned legumes, lentils, rice, canned tomatoes, peanut butter, baby food, and dried pasta. And in the fridge there was some fresh chicken, fish and ground beef as well an assortment of fresh fruit and vegetables plus three challenge vegetables that if they could incorporate into their dishes, they would receive bonus points. Do you know what Chinese Okra, Lila Malanga or Opal Squash are?  Not your run of the mill ingredients you find in a restaurant kitchen but ingredients that Parkdale Food Centre receives regularly from Produce Depot donations and Chef Simon from our kitchen must come up with some inventive ways to prepare.

The Chefs also  each brought along a sous chef, Chef Garland had his young nephew while Chef Stock recruited his wife who by day is a kindergarten teacher.  Each Chef had ten minutes to shop and then an hour to prepare at least three courses.  The tension was high in the kitchen as the guests crowded around to watch; imagine being less than ten feet away and watching the battle unfold. If you were at a restaurant you would pay well over $100 a person to attend such an event.  But tickets for this event go for a low price of $40 per person. And the entertainment value can’t be beaten.  Plus, before the event began  there was  amazing selection of appetizers and sweets from Thyme & Again, Urban Element, Marcie’s Cafe, Chef Simon Bell, Sarah Stewart, and Deb Abbott. Dominion City provided a wonderful selection of beer.

The judges and guests were treated to delicious dishes from both Chefs – dishes like butter chicken with pear baby food, served over sautéed kale in Opal Squash boats and Pakoras fried up just perfectly with rice flour.  Chicken stuffed with a mixture that included butternut squash baby food.  Most dishes used the Thirteen Social Enterprise spice blends adding a delicious warmth and depth of flavour.   And we received a generous donation of beautiful Olive Oil from the local Hintonburg business Aurelius Food to enhance each of the dishes.  The competition was stiff between the two Chefs but in the end Chef Stock won by a margin of just two points. What a night!

If you are looking for a great evening out, where you can eat amazing food, enjoy lots of entertainment with battling Chefs, and want to support the Parkdale Food Centre boy do we have a deal for you.  And all the money raised for this event goes towards kitchen programs. Watch out on the the Parkdale Food Centre web site and on our social media pages for the date of the next event. You won’t be disappointed!

Thanks to Deb for this article and to Sarah Stewart for the pictures below.